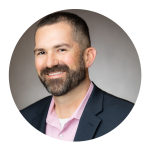 How do you take nine hospital locations, an expansive group of employed and independent physicians, and more than 400 points of care and whittle them down into a single, focused customer experience that patients can engage with on their mobile device?

That’s the critical question Baptist Health in Kentucky and Indiana started to evaluate six years ago as they launched their earliest digital health strategies. Their quest to find an answer eventually led them to launch their MyHealth mobile app in June 2021. It’s a MyHealth solution powered by the DeliverHealth platform.

In its first 12 months, MyHealth has tallied some amazing results, including more than 45.5K app downloads, with 10+ average sessions per user. Now, their team is rapidly adding new functionality to make their digital patient experience even better.

Recently, I had the opportunity to sit down with Lauren Schulz, their Digital Access Strategy Manager, for a frank conversation about the Baptist Health DFD journey. She revealed these nine must-haves for Digital Front Door success.

1. Know when to seize the moment.

For Baptist Health, creating a mobile app became viable once they adopted their current instance of the Epic Electronic Health Record in 2018. That gave them the ability to integrate Epic’s MyChart into another mobile app and expand upon the digital health features they could provide to their patients.

“It was important for us not to have two separate mobile apps, because we didn’t want to confuse our customers,” Schulz says.

To create their DFD, they chose to partner with DeliverHealth in early 2020. Just a few months later, the COVID-19 pandemic created surges in demands for virtual visits. That took the development of their DFD solution from nice-to-have to must-have.

2. Assess the build vs. buy question

The build vs. buy analysis was one of the first tasks the Baptist Health team dove into. To determine whether they wanted to build their own DFD or use a vendor, they asked these critical questions:

Another important consideration for Baptist Health: who would maintain their DFD post-launch. “A lot of people don’t think about this,” Schulz says. “iOS and Android are literally constantly making updates that could break your functionality or security, so ongoing development will always be needed.”

It’s pretty consistent for healthcare organizations to include their CIO, CMIO, CFO in the planning and decision making process. In addition, Baptist Health included Marketing, Digital Marketing, clinical staff, their Epic Director and her direct reports as part of their core DFD implementation and development team.

By embracing a cross-functional approach, Baptist Health was able to break down silos, foster honest conversations among key stakeholders, and prevent delays. Along the way, they invested time in ensuring all stakeholders spoke the same language.

By embracing a cross-functional approach, Baptist Health was able to break down silos, foster honest conversations among key stakeholders, and prevent delays. Along the way, they invested time in ensuring all stakeholders spoke the same language.

“We realized that terms like ‘digital front door,’ ‘mobile app,’ ‘branded app,’ and ‘native mobile app’ had different meanings to different people within departments,” Schulz says. “Creating uniform definitions up front will help make sure your teams don’t get lost in the simplest of details.”

4. Start with what you have right now.

Before they began their DFD journey, the Baptist Health team performed a through assessment with multiple departments. That helped them identify items they already had that they could build into their MyHealth app. Those included: 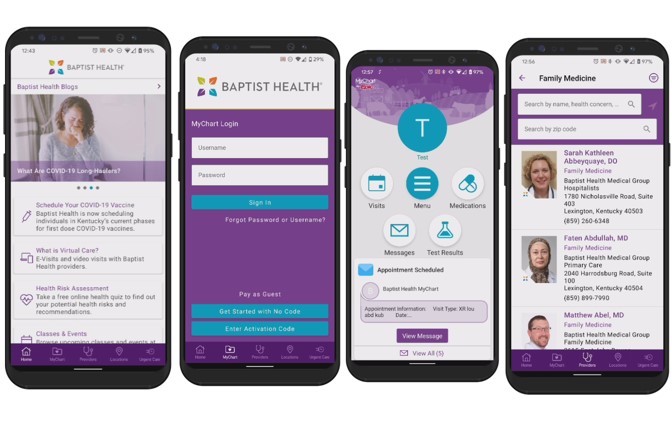 Choosing DeliverHealth as the platform to build their MyHealth app allowed Baptist Health to customize features that meant the most to their patient consumers.

“For us, it’s very important to have our blog content on the home screen,” Schulz says. “With MyHealth and the DeliverHealth platform, we can order or reorder that content without an app update, which I appreciate greatly.”

This kind of in-the-moment customization also gave Baptist Health the flexibility to add or remove COVID-19 vaccine dates and locations from MyHealth in real time based on supply and demand. And it helped them customize their provider directory within MyHealth so it pulls only the most relevant information.

When MyHealth launched, Baptist Health realized that the best way to achieve fast adoption was to start with their own people. They began with a soft launch, asking their core team to tell others about it through word-of-mouth. That allowed them to identify and address any potential problems early.

They also engaged their providers early on in the development and testing phase. “That allowed us to make important tweaks based on their feedback and helped us develop strong internal buy-in,” Schulz says.

Baptist Health also relied on their providers to help promote the app through posters and door signs, rack cards, brochures, and other in-office collateral. Providers and their staff recommended to patients that they download the app and gave them the QR code to make it easy for them. The core team also provided education to providers in monthly and weekly physician-focused emails so they knew that MyHealth was a resource they could share with patients. 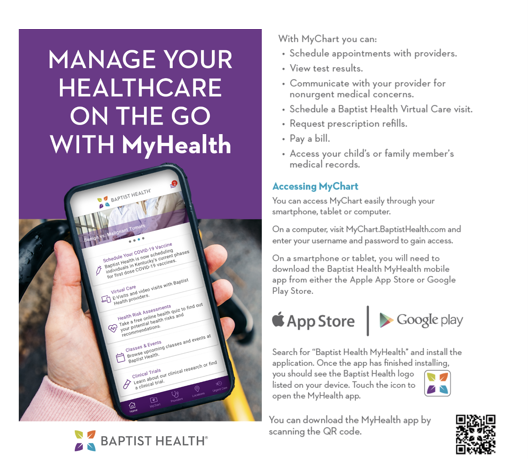 When it came to external promotion, Baptist Health realized early on that continual promotion would be necessary in order to drive both app downloads and ongoing patient engagement.

As a result, they got creative. In addition to running marketing campaigns specifically built around MyHealth, Baptist Health actively sought ways to integrate their MyHealth messaging into other promotions, such as a recent Mother-Baby campaign.

“Our digital front door lets us do a deep link directly to mother-baby events so an event invite can pop up on mom’s phone and make the experience so much easier,” Schulz says. “Moms can sign up right in the app!”

Another big win: Putting the Google Play and Apple App Store links to MyHealth onto the Baptist Health website footer. That one move led to 660K clicks in its first week.

Right now, the most popular MyHealth feature is MyChart, with Find a Provider, Find a Location, and Virtual Care Visits also ranking high in usage.

As Baptist Health looks to continue deepening their patient engagement strategy, they’re planning to add new features to MyHealth regularly to touch on every part of their patient’s digital health journey.

Anticipated upcoming feature rollouts include online appointment scheduling, a chatbot for appointment intake, and turn-by-turn wayfinding, the latter of which was recommended by the health system’s providers based on multiple patient requests. For 2023, they’re looking to add parking and approved medical apps within their DFD.

9. Set and track those metrics.

Schulz says that data and KPIs are a love language! Her team set their goals early on in the process so they had the time to determine which measurements mattered most to them.

For 2022, their KPIs include achieving:

Schulz had so many great insights to share that they couldn’t all fit into this blog post. So, check out the full recap of our webinar with her.

And if you’re ready to start your digital health journey with a comprehensive, mobile-first DFD built on the powerful DeliverHealth platform, Let’s talk.